YOU MAY HAVE NOTICED THAT ABBA ARE BACK WITH A NEW ALBUM (AND IF NOT, JUST WHERE HAVE YOU BEEN?). MIKE ATKINSON TAKES A LOOK AT VOYAGE, THE BAND’S FIRST SET OF NEW SONGS IN 40 YEARS, AND WONDERS WHAT THE FUTURE HOLDS FOR THE “ABBATARS” SERIES OF DIGITAL CONCERTS NEXT YEAR 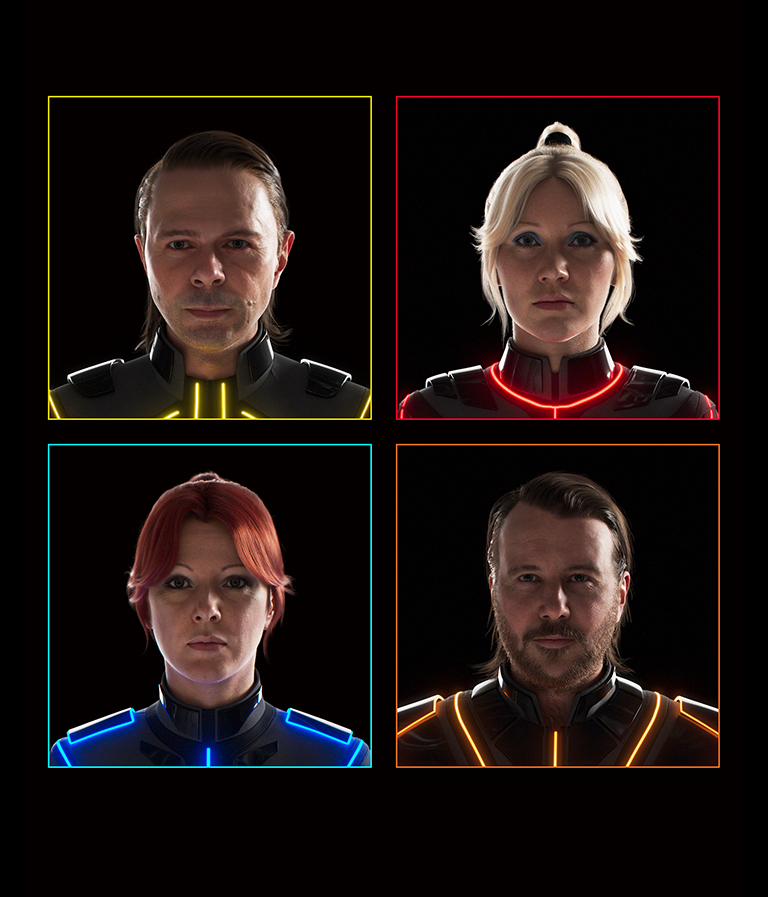 YOU MAY HAVE NOTICED THAT ABBA ARE BACK WITH A NEW ALBUM (AND IF NOT, JUST WHERE HAVE YOU BEEN?). MIKE ATKINSON TAKES A LOOK AT VOYAGE, THE BAND’S FIRST SET OF NEW SONGS IN 40 YEARS, AND WONDERS WHAT THE FUTURE HOLDS FOR THE “ABBATARS” SERIES OF DIGITAL CONCERTS NEXT YEAR

About twenty years ago, ABBA’s comeback single appeared to me in a dream. A piano-led campfire singalong, with a steady beat and a wistful lilt, its video featured all four members, thickly swaddled against the cold, floating on a wooden rowing boat in the middle of a misty lake, surrounded by a winter forest. Its title – Now My Race Is Run – felt apt: weary, elegiac and final. And since it was abundantly clear that the band would never reform, not even for preposterous sums of money, the dream gave me a weird sense of closure.

There are no songs called Now My Race Is Run on Voyage – ABBA’s ninth album, and their first in almost exactly 40 years – but I can happily forgive the omission. A few moments may indeed feel weary or elegiac, and of course an album such as this is always going to have an air of finality, but like all ABBA albums, the new pieces encompass a wide range of moods: some familiar, some brand new.

Given the excitement generated by the first two songs to emerge, the bar of expectation was set perilously high. Frida’s I Still Have Faith In You and Agnetha’s Don’t Shut Me Down are universally acclaimed and unassailably fine pieces of work, but could their standard be matched by Voyage’s remaining eight compositions?

At the stroke of midnight on Friday November 5th, the album dropped onto streaming services, and ABBA fans all over the world began tucking into their late night feast. Meanwhile, dozens of music critics began bashing out their hot takes, ready to catch the breakfast clicks.

Voyage’s mixed critical reaction can be attributed partly to that climate of over-expectation, partly to haste (our present journalistic model allows no time for prolonged reflection), and partly to mixed levels of ABBA fandom amongst the critics themselves.Thus if you’re a lifelong devotee such as Darren Styles, writing for Attitude, you’re going to declare the album “a glorious climax to the soundtrack of our lives”, with sounds that “occasionally tear the heart from my chest and use it as a football”. Whereas if you’re Jude Rogers at The Guardian – more usually employed as the paper’s resident folk music expert – you’ll feel “mild nausea” at the folkiest tune, variously dismissing others as a “crime against sense, sentimentality and sequencing”, “another miserable monologue”, or “a naive attempt to say something universal” which “makes you doubt their quality control”.

Not surprisingly, ABBA’s fans lean overwhelmingly towards the Darren Styles end of the critical spectrum. YouTube’s comment sections are awash with giddy hyperbole – “the people of this world bow in front of you” says one, while another avers that “a world without ABBA music would be like life without friends” – while on Facebook, anyone expressing mild dismay draws swift rebuttal. I saw this for myself when an old friend, waggishly dubbing Voyage as “Abba Bronze”, was urged to think of it instead “as a sweet swansong, a farewell to their true fans, and with your expectations lowered you might enjoy it more”.

This latter take is, I think, a wise one, with an implication that maybe ABBA themselves have had to lower their own expectations in order to collaborate on new work. After all, when you’ve already got the likes of The Name Of The Game and The Winner Takes It All in your back catalogue, how can you hope to compete with work that has steadily accrued resonance over many decades?

It was a problem that the three surviving Beatles faced when they released two new songs in the mid-90s a mere 26 years after splitting up, with proficient but underwhelming results that neither tarnished nor built on their legacy. Both were based around vocals from unreleased John Lennon demos, and ABBA have sensibly limited this approach to just one song on Voyage.

Sitting in the middle of the album, Just A Notion was demoed in 1978 for possible inclusion on Voulez-Vous. The original vocals have been retained and the backing track reworked, giving us the album’s one moment of uncomplicated, carefree optimism. Stylistically, its Schlager-pop bounce harks back to ABBA’s earlier days, when lurex and kimonos were worn without irony, Benny’s piano lines were at their chunkiest and catchiest, and shuffling glam-rock rhythms were paired with honking brass to joyous effect.

Elsewhere, the bitter sweetness that lies at the heart of ABBA’s appeal is rarely far from view. That said, there’s one song, the Christmas-themed Little Things, where the sweetness is piled on so thickly that it teeters on the brink of absurdity. With references to Santa, stockings and “tiny elves with wings”, a snatch of Twinkle Twinkle Little Star, and a children’s choir drawn from the same school that supplied the voices for I Have A Dream, its unabashed sentimentality will have grinches everywhere wincing in horror. But even here, not all is as it first seems. There’s that rarest of lyrical details, a sexual reference – albeit so tastefully veiled that no child’s ears will need covering – and the sentimentality is then promptly undercut by a segue into Don’t Shut Me Down, where children’s laughter is replaced by coldness, darkness and rain. It’s a masterful piece of sequencing, reframing the familial bliss of Little Things as a vanished idyll.

From this point on, familiar themes of marital discord return, picking up where late-period ABBA left off. Once again, Björn places some unsettling lyrics into the mouths of his singers – who, it must be said, interpret them beautifully, and in a way that suggests that they’re fully on board. Still, the burden of guilt in each case does seem to rest with the women, while their male partners emerge almost blame-free. Thus, on I Can Be That Woman, Agnetha alludes to a drinking problem, confessing that “it’s clear that I’ve hit my rock bottom, I’m aware of how far I’ve sunk”, while on the deceptively upbeat No Doubt About It, we’re told that “hands down, the fault is mine, and I’m prepared to shout it from the rooftops if it makes you happy”. We’ve been here before, most memorably with One Of Us and The Winner Takes It All, and again we’ll never know if old scores are being settled, or whether this is mere story-telling invention.

In many ways, this is a very strange album indeed, whose second-language lyrics often strike peculiar notes that a native speaker could never reach. As with so much of ABBA’s music, much of it can initially sound off-kilter and even somewhat naff, but there are rich rewards for those who are prepared to push through. Musically, it’s more Benny’s album than Björn’s, for while Benny is credited with keyboards, arrangements and production, Björn plays no instruments at all, takes no lead vocals, and is merely credited as “associate producer”. However, if the pair’s recent interviews paint a fair picture, he does seem entirely comfortable with the arrangement.

As for the live shows, which will open in May 2022 and run until at least December (but almost certainly long beyond that), expectations are still as high as they were for the album. Tantalisingly little is known about these shows. The 3000-capacity purpose-built ABBA Arena, on the southern edge of London’s Olympic Park, is still under construction. We’ve had some brief glimpses of the so-called “ABBAtars”, digitally recreated from performances by the present-day group but featuring the original vocal tracks, but we don’t yet know how they will interact visually with the 10-piece live band on stage – although we do know that they won’t be holograms. We don’t know what will be on the set list, or even how many songs will be performed (it was 22 in one interview, 24 in another), but we do know that I Still Have Faith In You and Don’t Shut Me Down will be the only new material represented. Beyond that, we know that the live band auditioned by playing Voulez-Vous, Knowing Me Knowing You, Gimme! Gimme! Gimme!, and Eagle. An official trailer clip for the show also featured Summer Night City, and Benny and Björn have promised us a mixture of the biggest hits with a few less obvious tracks.

It’s always fun to speculate, though. I Still Have Faith In You, the opening track on the album, would make a wonderfully poignant opener for the show itself, and perhaps it could followed by S.O.S, then one of the big dance tunes such as Voulez-Vous. All nine of the band’s UK chart-toppers surely have to be in there, but which of the deeper cuts will make the grade? At the launch event, mention was made of King Without A Crown and Under Attack as songs which their writers considered to be underrated. Slipping Through My Fingers, Our Last Summer and When All Is Said And Done, all later album tracks, have particularly high streaming figures and would be popular fan choices. The adventurous and atmospheric title track from The Visitors, a big gay dance hit in its day, could be a potentially stunning inclusion. And then, at the end of the show, could we be looking at The Way Old Friends Do (which traditionally started the encores), followed by Dancing Queen and Thank You For The Music?

All guesswork aside, this is still an awful lot of money to shell out, when you’ll essentially be watching a bunch of cartoon figures miming their old vocals, and so for anyone purchasing tickets for the show a certain leap of faith is required. But then again, when you factor in ABBA’s track record for setting the highest standards of perfectionism in all that they do, it does feel like a risk that’s well worth taking. Voyage: The Album has already delivered. Let’s hope that Voyage: The Show does so as well.

Voyage is out now.