MORE AND MORE SUPERHEROES IN THE COMICS AND MOVIES ARE COMING OUT AND IDENTIFYING AS LGBTQ+, AND THIS YEAR’S PRIDE MONTH WILL CELEBRATE THEM AS NEVER BEFORE, WRITES CRAIG STORRIE 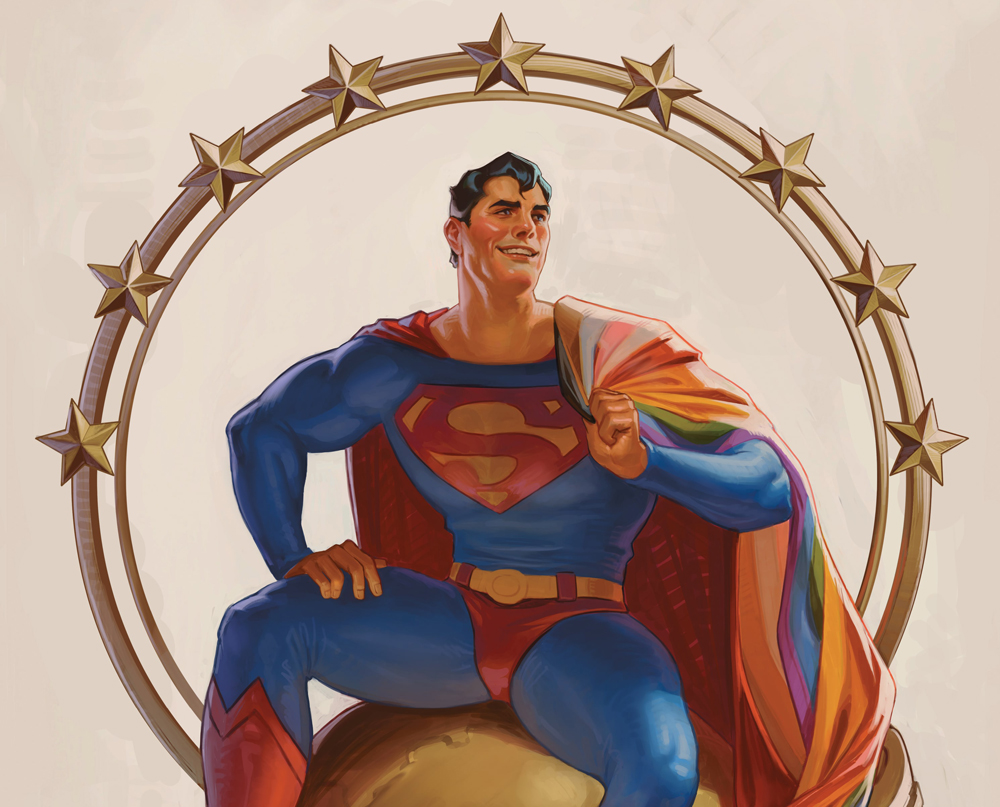 The representation of LGBTQ+ people in the media has come a long, long way in the last few years. Many TV shows and movies have characters that are no longer bad stereotypes or only there as token representation. Things that were previously only hinted at are now able to become reality thanks to more awareness and acceptance surrounding the topic of LGBTQ+ people. This also extends to stories about superheroes, be they live action, animation or within the comics themselves.

Netflix’s The Umbrella Academy, based on the Dark Horse comic of the same name, is one such show that really pushes things forward with a diverse cast of characters. A story about seven adopted superpowered siblings born on the same day, both Klaus and Vanya (played by Robert Sheehan and Elliot Page respectively) are on the LGBTQ+ spectrum. The series doesn’t use their sexualities as a gimmick and the writers are able to wonderfully portray these characters as human beings who happen to be LGBTQ+, rather than characters who only have been made queer to define them as people. The Chilling Adventures of Sabrina, also on Netflix and based on the Archie comic of the same name, has as two of its main characters the warlock Ambrose Spelman, whose pansexuality is never commented on, and Theo, a trans boy whose birth name was Susie.

Whilst it took them a while to catch up, the Marvel Cinematic Universe, or MCU as it’s known, is finally adding more LGBTQ+ characters as it moves forward, even though some characters who are LGBTQ+ in the comics are not in the movies. Tessa Thompson’s character Valkyrie has always been bisexual but sadly that scene from Thor: Ragnarok ended up on the cutting room floor. Thankfully, it’s now finally being realised on screen in the next film Thor: Love and Thunder. Even the Marvel TV shows have started to bring more LGBTQ+ characters into the MCU. Wandavision’s Billy and Tommy, who are the children of Vision and the Scarlet Witch, are both LGBTQ+ characters in the comics and the end of the series hints that they will return to join the upcoming Young Avengers. The Falcon and the Winter Soldier also hints that James “Bucky” Barnes may in fact be bisexual, something he can explore more openly now, instead of when he was growing up before the Second World War.
This brings us to June, Pride month 2021, when the two biggest comic book publishers are releasing issues and collections based around their LGBTQ+ superheroes.

DC’s collection will be an 80-page celebration of both LGBTQ+ characters and creators and it will introduce a new superhero to the DC universe called Dreamer. First seen in the TV series Supergirl, Dreamer is a trans woman who has the superpowers of astral projection and precognition to name a few and is the very first trans superhero on television. She is also an ancestor of the existing character Dream Girl, a member of the Legion of Superheroes in the future. The story will also be written by Nicole Maines, the actress who portrays her in the Supergirl series. Maines is transgender herself and is a long-time activist for trans rights. Other issues published in June will have Pride-themed variant covers too featuring heroes such as Superman, Nightwing and Wonder Woman and they are just downright gorgeous.

Marvel comics, on the other hand, is publishing the one-shot Marvel Voices: Pride #1, which is Marvel’s very first queer special focusing on the LGBTQ+ characters of their universe. The issue will also be utilising the talents of their LGBTQ+ writers and artists to create the stories within. Since 1992’s ground-breaking Alpha Flight #106 in which Northstar reveals his sexuality after his newly adopted daughter dies of AIDS, Marvel has created a wide variety of LGBTQ+ superheroes from all walks of life and the one shot will proudly honour this legacy. Characters such as Wiccan, Hulkling, Iceman, Mystique, Destiny and Wolverine’s son Daken will all get their time in the spotlight with stories of empowerment, inspiration and pride.

More than ever, LGBTQ+ people need fictional characters to look up to. The world is a crazy place right now and we need pride and hope from anywhere we can get it. Let’s hope that this is something that becomes a staple in the media and grows into even more of a celebration as time goes on.

“More than ever, LGBTQ+ people need fictional characters to look up to. The world is a crazy place right now and we need pride and hope from anywhere we can get it.”