DRAG ROYALTY JONNY WOO AND LE GATEAU CHOCOLAT HAVE TAKEN THEIR INDIVIDUAL PERFORMANCE ART TO A UNIQUE HEIGHT. ON THE EVE OF THEIR SERIES OF SHOWS AT LONDON’S SOHO THEATRE, WE TALK TO THEM ABOUT THE IMPORTANCE OF MUSICALS, THEIR LONG-STANDING FRIENDSHIP, AND THEIR DRAG INFLUENCES 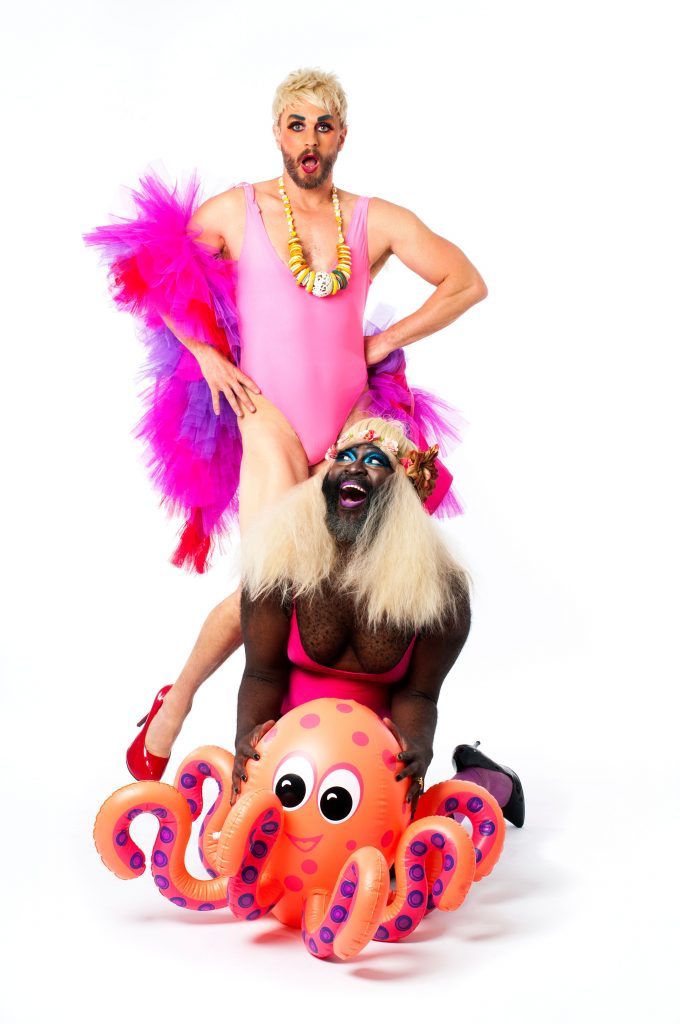 What can we expect from Now That’s What We Call Musicals, your show at London’s Soho Theatre this Christmas and in January?

Le Gateau Chocolat: I think party, enjoyment, distraction, and comfort. I think that’s the most important thing. The world is still asking what we want to see after a pandemic we’ve all experienced. Our show answers that question and it doesn’t have to be anything, we can just get together, laugh and sing. It’s not that we don’t have profound messages that we’re holding, it’s just that we both know that a part of the show is to laugh.

Jonny Woo: I think London is ramping up for a wild Christmas. I can feel it tangibly in the streets. We are going to facilitate that wild celebration. It’s sequins, and comedy, and cartoon, and capers, and musical hits you’re going to want to sing along to.

It’s a bit of a cliché that lots of LGBTQ+ people like musicals. What’s the big attraction?

JW: Why do I like musicals? I like musicals because often they have a strong, tragic, female lead, such as in Les Misérables. Musicals, by their very nature, have an inherent sense of camp; just the notion that you burst into song, is not your norm, as it were. They’re also escapist, and as queer people we often feel that need to escape. There are obviously sad musicals, but often they’re celebratory, and often they’ll have an optimistic ending, a lot of optimism.

LGC: Yes to joy and escapism. Musicals also do the supernatural thing of a song coming after you’ve said everything via dialogue, but they’re not tautologous. The successful ones then psychoanalyse or offer a bit more after we can’t say anything else. I think the reason why that appeals to the queer community is that, for instance, growing up in Nigeria, I hadn’t formed the vocabulary to have some conversations, but I knew that some of that was in music, and in musicals. We would escape into musicals, but we would find a lot of profundity in it.

If you had to choose one song or musical to sum up your life what would it be?

JW: Some people, from Gypsy, cause “some people ain’t me”!

Each of you has taken drag in a new direction. Why drag – what makes drag important?

JW: I started doing drag in New York in 1999, and I was taken to Jackie 60 by Lavinia Co-op and my friend Brandon Olsen, on the closing night where I saw, amongst others, Justin Bond as Kiki, and Herb, artists like Richard Move doing Martha Graham, and John Kelly as Joni Mitchell. I was exposed to those kinds of artists, then me and my friend Brandon started doing spoken word on the burlesque scene, and elements of drag were part of that. We used to run around, going to muscle bars with our version of radical drag and freak out muscle queens, that’s where my drag comes from. This notion nowadays that drag is for everyone, I think it’s more, sometimes it’s for everyone, and sometimes it’s just for us, depending on how we dress it up. If it’s dressed up in sequins, then everyone can have it, but If I’m feeling a bit rotten, then it’s just a private affair.

LGC: My drag was thankfully shaped by performers like Jonny Woo, Dolly Rocket and Boogaloo Stu. Immediately, drag for me was not about female impersonation, because none of them were trying to caricature anything. I arrived at the reality that my drag is more about being chameleonic as opposed to impersonating anyone. The roots of my drag were born from growing up in Nigeria, when I was four or five. Once I knew I was gay, I became really adept at working out what situations needed: do I need to be a clown here, do I need to throw myself down, etc. That’s where my drag came from, finessing my identity to suit situations, and that ended up on stage, also sculpted by the people that I saw do drag first. One of the very first performances I saw in drag was Taylor Mac, and there was nothing about it that was typically drag. Both Jonny and I have never lived in what people consider typical drag.

JW: It’s a very loose term for me. I don’t really identify as a drag queen, but it’s just easier for people to understand.

After your shows at the Soho Theatre, what is in the future for each of you?

LGC: I’m going to wax lyrical about Jonny Woo, dear friend of mine. When we first met and started performing together, I used to go and stay with Jonny Woo in East London at his flat on Mare Street. Because our shows are so rooted in our friendship, before the show we would chat, during the show we would chat, after the show we would chat. That was when the book and film The Secret was really massive, and Jonny had just read it. On his fridge he’d written a blank check to himself. Both of us discussed what we wanted to do in the future. Since then, maybe 2008, 2009, we talked about so many things: wanting to do solo shows, wanting to write a musical, wanting to buy a flat, wanting to open a bar, wanting to open a performance space, and however many years later, he’s literally ticked all these boxes. Give someone else a chance you f***ing bastard! It’s been very very exciting to witness that, to be inspired by that. There’s 10 years between us. And when I’m 50, and Jonny’s 60 and we’ve started to do our show in gay old people’s homes, I want to have ticked a lot of these boxes as well. So what’s next for us? Continuing to tick boxes and go in directions that we never anticipated.

JW: You have a lot of secret things lined up, that are going to flourish and be marvellous and huge, that you haven’t told me about yet. “Oh I’m just doing this thing at the Old Vic.. Oh I’m just doing something at The Globe… The National was on the phone…” Le Gateau Chocolat is going to be doing some very extraordinary high-profile, glamorous venue, extravaganzas.

LGC: Going back to that fridge and the blank check, we are just going to keep on changing what it is that we want to cash. None of this is planned, it’s not what I studied in Uni, this isn’t plotted. It just keeps on taking us in really wonderful directions, and so far we’ve been open to all of it. I didn’t know Jonny knew how to write a musical, but he wrote Brexit the Musical. We’ll just keep on saying “yes and”.

JW: Someone once said to me, “Jonny, you’re very lucky to be the kind of person who can follow your own muse’” and I think we’re in a very privileged position to be able to follow our own muse. So what happens next year? I’ve got a plan for next month! Un-Royal’s going to go to the Soho Theatre Walthamstow venue, Soho Theatre’s not going to get rid of us for quite a while…